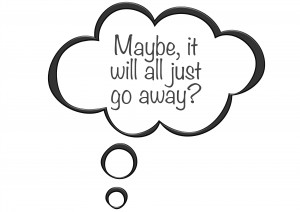 CEOs fail for one of two reasons:

The reason it takes so long to ask for help is simple: The CEO is on top of the world and it seems that nothing could possibly go wrong. So when failure begins to creep in, there is no ‘Plan B’ and possibly — for the first time in his or her life — he or she is experiencing tremendous fear.

Let’s look at the first problem: Borrowing money to bridge the gap when business begins to slow down.

This is a very dangerous trap because even if business comes back to where it was, it is impossible to catch up with a line of credit that has been spent during the hard times. It is much simpler and more effective to cut back expenses and payroll. Period.

The businessperson might also have a problem with greed. For example, if a company is making money by selling five items, then the myth is that the same company can make more money selling ten of those items. This is another dangerous trap. The cost of goods and services can create diminishing returns and result in catastrophic failure.

Let’s move on to the second problem: Bad behavior. Bad behavior includes drugs, alcohol, improper romantic relations, and gambling. The first three are self-explanatory, but gambling is much more sinister.

Which is more dangerous? Refinancing your house for payroll or gambling corporate funds in Las Vegas? Is it not just as dangerous to blow the limits on your charge cards hoping for money to pay them back?

It is just as dangerous to entertain an unprofessional romantic relationship and inflict agony on a marriage as it is to play Russian roulette.

The solution lies in three little words: Ask. For. Help. It can be the hardest thing to do, but it’s what I told those that came to see me at the Rotary Club of Los Angeles. Despite experiencing tremendous fear, seeking help from someone like me is the first step to getting these issues under control and getting your business — and your life — back on track.