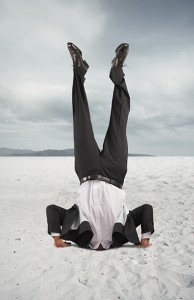 Denial is an unfortunate reality of the human condition.

Extreme denial results in the loss of your business, your self-respect and the opportunity for a successful future. Sometimes people are overwhelmed by the problem at hand, making it easier to bury their head in the sand and put off difficult decisions.

Momentum As a Force for Good… and Evil

Momentum is an equal-opportunity employer. When you are doing well, momentum will serve you in a cash-positive environment, but when business takes a turn for the worst, it is a downhill avalanche that destroys all relationships and opportunities in its path. This kind of momentum seems unstoppable.

Someone once said that everyone pays the piper. Some pay a little along the way, while others end up with a balloon payment at the end.

A Case of Denial

Some years ago I met a couple who had become used to a lavish lifestyle and they were not willing to cut back. They had a manufacturing business that had been in the family for over 30 years and they had become the second generation to take charge of it. A declining market dictated that they should cut back immediately — including selling or downsizing their house and cars. Unfortunately, this family had a false sense of security because of a significant inheritance.

My advice was ignored. A bankruptcy proceeding ensued and insolvency prevailed. At the end of the day, the bankruptcy simply gave the company just a few more minutes to survive. In the end, the creditors attached the inheritance and the company was dissolved. There were four families, all divorced now, and it was a catastrophic failure.

In the face of undeniable debt, they refused to believe that the game had changed. They suffered the ruthless consequences and it left their lives in ruins.

A Second Chance Only Happens Once

There is an argument that there is always another chance. I don’t know about that, but I do believe one thing for sure: A second chance only happens once. Don’t take it for granted.

We can all live to fight another day if we handle our responsibilities faithfully, truthfully and by the letter of the law. There is one word that can fight and destroy denial, and it is diligence!